Java IDE and the First Program¶

Java is an object-oriented programming language. Syntactically it is close to C++.

As the example environment on the course we will use NetBeans. NetBeans is available on all operating systems licenced under an open source license (Apache 2.0). The installers for NetBeans can be found here.

As our first Java program we will implement a first program classic originally by Kerningham and Richie - Hello World! program. Its advantage is that it is easy to get to know both the basic syntax of the language and the basic use of the development environment. In addition it offers a way to check the the development environment is set up correctly and is up and running.

At this point only one code file is needed to implement the program. Hence we will start by using NetBeans simply as a code editor. Open NetBeans. A new file is created either by clicking the New File icon or selecting File->New File from the menubar. 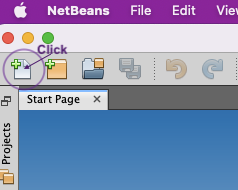 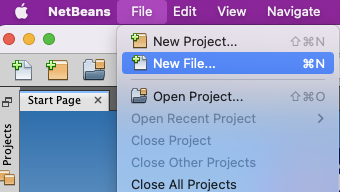 Then you should choose Other->Java File->Next. Name the file and select a suitable folder for it. Java source code files should always be named after their main level class (or interface). For example, if the main level class is called TheBestClassEver, the code file is named TheBestClassEver.java. Make a note on case; theBestClassEver.java does not work as the first character is in lower case. It is smart to place the code files written during the course into a specific folder so that they are easily found when needed. There is no need to define a project. Finally click Finish to create the file and a handy code base as its contents. 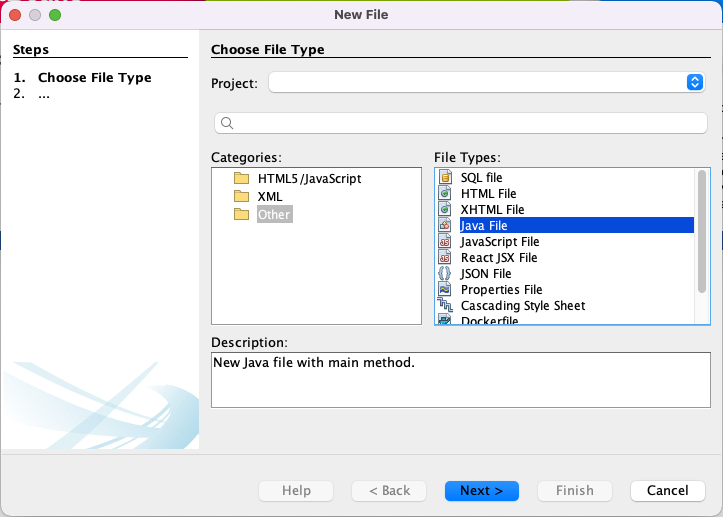 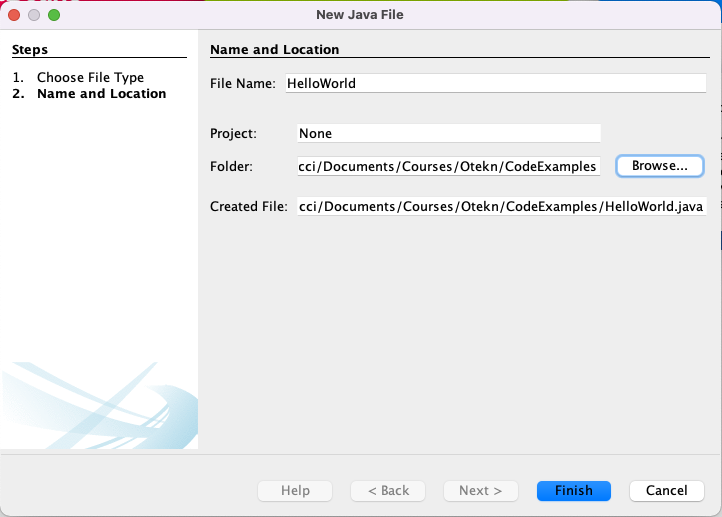 The code base created is the following:

The code base created by Netbeans defines the main-function’s parameter using C-style array syntax String args[]. This deviates from the widely adopted Java convention that array brackets should be placed at the end of the type and not the name: String[] args. All code examples in this course will use this latter style with arrays. And so should also you!

Comment blocks in Java are like in C++ i.e. the familiar // a line of comment are line comments that run from // until the end of the line. A block comment is surrounded by /* */. Block comments cannot be nested and the asterisks in the beginning of the lines are to improve readability. A comment block starting /** is a Javadoc-comment block that will be covered later. It is possible to create interface documentation directly from code with Javadoc.

Every Java program needs to contain a method called main i.e. the main program. It is always of the form public static void main(String[] args). Let’s take a short look into the different parts of this incantation:

Let’s then write some functionality to our program. We want to print the text Hello World! onto the screen. The functionality is written inside the function block of the main program. For printing a suitable class from the package java.lang is needed. Such class is called System. Java.lang. defines a set of basic classes (e.g. System, String ja Double) for the purpose of the language and it is available in the programs automatically. We will get back to packages later. Now, write System.out inside your main. You will notice that NetBeans helps you with finding the correct method.

When you have added the correct method call into your code i.e. System.out.println("Hello World!") you can compile and run the program. A single file can be run in NetBeansis by selecting Run->Run File. However, it is important to be able to compile and run programs on the command line (Terminal or Console in Linux, Terminal in macOS and Command Prompt or PowerShell in Windows) as well. On the command line, go into the folder you set NetBeans to save you code. Running a Java program consists of two steps. First the source code is compiled into bytecode. Then the bytecode is executed with an interpreter in the Java Virtual Machine (JVM). JVM makes Java portable between different platforms i.e. the same bytecode is executable everywhere where the JVM is available. We will take a closer look at the JVM later. The command javac file.java, for example javac HelloWorld.java compiles the source code into bytecode. After a successful compilation a bytecode file file.class, for example HelloWorld.class, is created. The bytecode gets interpreted by giving the name of the class to the interpreter with java file, for example java HelloWorld.

The first submitted programming task of the course asks you to implement a program that prints out the average value of numbers the program receives as command line parameters. We will next review some further basic Java features required in the task.

Your program (or its main function) receives command line parameters as a string array String[] args, which can be used just like any normal array in the main-function. You will most probably need some kind of a loop in order to process the command line parameters. The basic choice is between while and for loops, but the latter are typically preferred for iterating over some collection of values. Java for loops have a very similar syntax with C++.

There is also a simpler for loop variant that iterates over all items in some array or container.

If you want to iterate over an array in an index-based manner, you first need to know the size of the array. All Java arrays have a member variable length that tells the size of the array. Java uses a similar dot-operator as Python and C++ to refer to member variables, and also array value references use a familiar “index inside square brackets” syntax. The example below shows a loop that prints out all command line parameters together with their indices. Note how Java allows you to concatenate values and strings with the +-operator in a similar manner as e.g. Python.

If s is a String that represents a number, you may convert it into a double value by the call Double.parseDouble(s). An example:

Given these examples, the mean calculation task should be quite straight-forward.